We have heard that a sedentary lifestyle and sitting all day at work, is the “new smoking” health hazard of our generation.

Our team did a little research and we were alarmed. Sitting too much is seriously bad for your health.

Not only does sitting burn very few calories, which contributes to weight gain, but people who sit a lot every day have an increased risk of diabetes, heart disease and early death.

This is a major problem for those of us who work in an office environment, because we sit down for most of the day. Fortunately, Sit- to-Stand desks are becoming increasingly more popular and definitely more affordable.

Our team tried out the Kantek Sit-to-Stand Workstation and we all give it a perfect five-star rating! It did not require any installation, and simply sat on top of our existing desk.

We really liked the fact that it held two monitors. With one monitor, it allowed room for a copy stand or a stack of papers, phone, and ink pens.

Best of all, it adjusted easily to the varying height of different users on our team.

Everyone from the shortest on our team (sorry, Andrea) to the tallest (Steve) found a comfortable position with the Kantek Sit-to-Stand Workstation System.

So, Why Should I use a Sit to Stand Desk?

Although research is still in early stages, it does appear that using a Sit- to-Stand desk can have impressive benefits for health. It may also increase productivity.

At the very least, using this type of desk can partly negate the harmful effects of sitting too much.

Here are 6 benefits of using a standing desk:

1. Standing Lowers Your Risk of Weight Gain and Obesity

While exercise is the most effective way to burn calories quickly, simply choosing to stand instead of sitting can also be beneficial.

In fact, when compared to an afternoon of sedentary work, an equal amount of time spent standing has been shown to burn over 170 additional calories. That makes us VERY happy!

That’s almost 1000 extra calories burned each week from simply standing at your desk each afternoon!

Generally speaking, the more your blood sugar levels increase after meals, the worse it is for your health.

This is especially true for those with insulin resistance or type 2 diabetes.

In a small study of 10 office workers, standing for 180 minutes after lunch reduced the blood sugar spike by 43% compared to sitting for the same amount of time

Both groups took the same amount of steps, indicating that the smaller spike was due to standing rather than additional physical movements around the office.

Another study involving 23 office workers found that alternating between standing and sitting every 30 minutes throughout the workday reduced blood sugar spikes by 11.1% on average.

The harmful effects of sitting after meals could help explain why excessive sedentary time is linked to a whopping 112% greater risk of type 2 diabetes.

3. Standing May Lower Your Risk of Heart Disease

The idea that standing is better for heart health was first proposed in 1953.

Since then, scientists have developed a much greater understanding of the effects of sitting on heart health, with prolonged sedentary time thought to increase the risk of heart disease by up to 147%.

And THIS got our attention – even an hour of intense exercise may not make up for the negative effects of an entire day spent sitting.

There is no doubt that spending more time on your feet is beneficial for heart health … and we found it made our Fitbit numbers soar!

Did you know that back pain is one of the most common complaints of office workers who sit all day? That didn’t surprise us. Many on our team – yes, even the young, fit millennials among us – have suffered from neck, shoulder and low back pain. We learned that chronic muscle pain is one of the number one reasons employees take sick days!

Studies show that sit-stand desks reversed some of those ailments within a 2-week period. We are willing to try that!

Standing desks appear to have a positive influence on overall well-being. Think of it as a great “energy boost” – especially during the mid-day slump.

For our team, we all felt less stress and fatigue than those long days when we remained seated the entire work day.

Our own experience align with broader research on sitting and mental health, which links sedentary time with an increased risk of both depression and anxiety.

6. Standing Desks May Even Boost Productivity

A common concern about standing desks is that they hinder daily tasks, such as typing.

While standing each afternoon may take some getting used to, we found that standing not only improved our mood and energy levels, but our focus as well, and using a standing desk is more likely to boost productivity rather than hinder it.

It’s Time to Take a Stand

Check out this short video and then contact us about ordering your Kantek Sit-to-Stand Workstation today!

While you’re at it, check out these awesome accessories to compliment your new system:

Stabilize the muscles of your back, core, hips, legs and ankles with the Steppie Balance Board by Victor.

Reduce fatigue with this Sit-to-Stand Chairmat designed by E.S. Robbins, specifically for Sit-to-Stand Work Environments. It’s like having two ultra-comfortable mats in one. 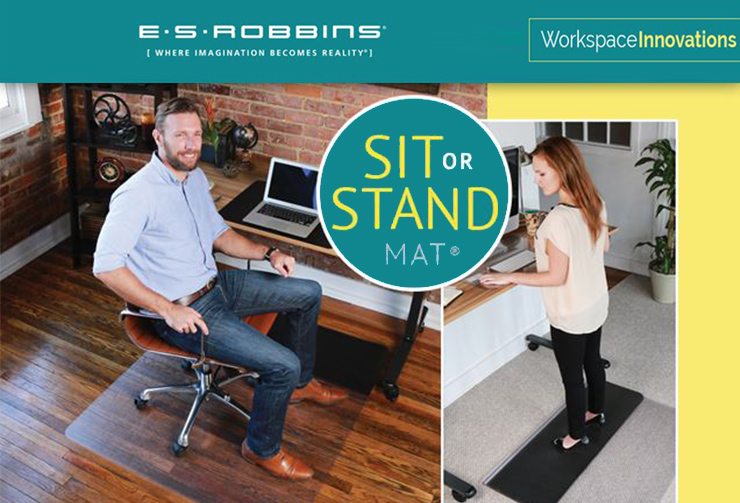